Aristotle taught that virtue lay in the moderation within what he called “spheres of action,” or “spheres of feeling.”  Courage, he said, was practiced in the sphere of fear and confidence, avoiding excesses or deficiencies of either, which would result instead in cowardice or rash action.  Truthfulness lay in the sphere of self-expression, avoiding the vices of either boastfulness or false modesty.  In the sphere of pleasure and pain, temperance was found between licentiousness and senselessness. (See figure below).  In each case, virtue is found in the moderation of actions in a given sphere, while vices lay in either deficiency or excess of such actions.

Another philosophy, illustrated by the following meme (Figure 2). currently circulating around the Internet, hints at Aristotle’s teachings, while oversimplifying and thus corrupting them.  By eliminating the column Aristotle’s spheres, and instead relying only on a simplified spectrum of actions within those spheres, this philosophy forwards that we must practice moderation of the virtues themselves.  So, the illustration provides, a lack of integrity would lead to corruption (I agree).  However, it also infers that too much integrity leads to legalism. 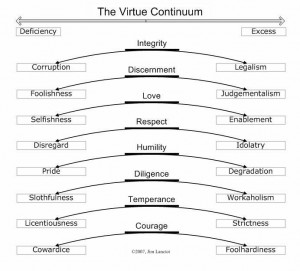 It is here I must disagree on several levels, finding such an argument to be a misleading argument based in postmodern relativism.

Starting with the first line of the chart, “integrity” is not a moderation between corruption and legalism.  Corruption certainly indicates a deficiency of integrity, but legalism by no means is a reliable indication of its excess.  In fact, one can have a complete lack of integrity and still be legalistic (and simultaneously be corrupt).  For proof, one need only watch a session of Congress in which individual representatives or Senators manipulate rules of order to benefit their own interests. And this is not new – witness the Pharisees and Saducees of Jesus’ time.

If we did want to find a sphere of action, perhaps “application of rules,” with corruption and legalism as its extremes, a more appropriate label for the median might be “discretion.”

Likewise, I argue that judgmentalism is not an excess of discernment, but an absence of mercy.  To be sure, one need not have discernment at all to be judgmental!  And does one really believe that “enabling” is an excess of love?  Hardly – enabling behavior comes from a deficiency.

If we continue down the ladder, we will find similar arguments refuting the chart’s validity.  Disregard and idolatry both deny respect for what is truly important.  Pride and degradation (or false humility) live together, rather than across a spectrum.  Sloth and overwork both involve disregard for virtuous priorities.  Temperance may indeed lie between licentiousness and strictness (Aristotle said senselessness), but is meaningless without the context of the sphere of pleasure and pain.  And similarly, foolhardiness is not excessive courage but excessive self-confidence.

Further, there can be no such thing, as forwarded by this philosophy, as an excess of virtue.  Certainly not the virtues presented.  Can you imagine a world with too much Integrity, discernment, love, respect, humility, diligence, temperance, or courage?  Oh, if only that were the case!

Similarly, there can be no such thing as a healthy moderation of vice.  If “moderation in all things” were indeed true, we would ask the FDA to prescribe minimum levels of arsenic in our drinking water rather than only maximums!  Similarly, there is no healthy minimum level of corruption, foolishness, judmentalism, sloth, idolatry, legalism, or other such vices!

We should not practice moderation of either virtue or vice, but strive for the highest levels of the former and the elimination of the latter.