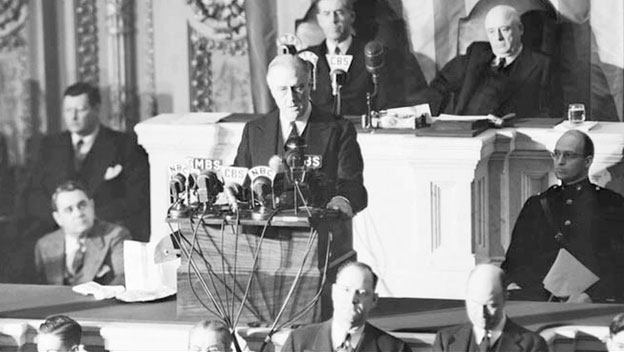 “Our national security strategy, once a robust combination of diplomacy, information, military, and economy, has become one of ‘just do something…anything,’ in which we believe any problem can be solved with a sprinkling of drones, bombs, or boots.  We simply cannot sustain this accelerating expenditure of blood and treasure.”

In recent years, our country has become embroiled in many wars, most of them not authorized by Congress as required by Article I of The Constitution.  In fact, the last authorizations for the use of military force (AUMF – what we have substituted for a formal declaration of war) were for Iraq and Afghanistan, issued under the administration of President George W. Bush.

President Obama has cited both AUMF 2001 (Public Law 107-40, directed at those who committed the 9/11 attacks, and which authorized the invasion of Afghanistan) and AUMF 2002 (Public Law 107-243, authorizing force against Iraq) as his justification for his use of military force throughout the Middle East, and specifically in Iraq and Syria against Daesh (also known as ISIL/ISIS).

The problem is that that neither of those AUMFs are valid for such action.

AUMF 2001 specifically authorizes force against “nations, organizations, or persons he determines planned, authorized, committed, or aided the terrorist attacks that occurred on September 11, 2001, or harbored such organizations or persons.”  Daesh, an organization which did not exist prior to 2013, does not fall under such authority.

AUMF 2002, on the other hand, had as its scope the now-defunct government of Iraq under Saddam Hussein and the terrorist organizations that government supported, and was limited to the confines of Iraq.

So, just like his war in Libya, President Obama’s war in Syria and Northern Iraq is illegal under The Constitution.

You might ask why this matters.  Shouldn’t President Obama, in his role as Commander-in-Chief, address the threats represented by Daesh?

Yes, he should.  However, The Constitution is full of brilliant checks and balances between the three branches of government, and one such system of checks and balances is between the Legislative and Executive branches when it comes to waging war.  In short, when the President as the Head of State determines that a threat to our national security and/or interests exists that warrants the use of military force, it is his responsibility to request authorization from Congress to use that force.  It is then Congress’ responsibility to evaluate the request, debate it, to authorize such force, and to initiate legislation to authorize expenditures to support the war.  Finally, the President, in his role as Commander-in-Chief and under authorization from Congress, executes the war.

Of course, some time-critical events especially in this era of rapid decision cycles preclude the President from seeking such authorization; yet even in these situations, it is the President’s legal responsibility (under the War Powers Resolution, 50 USC 1541-1548) to inform Congress within 48 hours and to gain authorization for continued military operations.

In the absence of such authorization, whether pre-emptive or reactive, the President must withdraw all forces within 90 days.

Again, you may ask why it is important for these laws to be followed.  I present three reasons.

First, we are a nation of laws.  That is the definition of a republic.  If we allow our leaders to ignore those laws, we risk either anarchy or dictatorship.

Second, by not holding our elected representatives to the clearly-defined requirements of The Constitution and applicable laws, we have created a vicious cycle of continuous and indiscriminate war.  In the past 25 years since our 1991 war in Iraq and Kuwait, we have committed combat forces to a dizzying number of places around the globe: Zaire, Sierra Leone, Bosnia, Somalia, Macedonia, Haiti, Liberia, Central African Republic, Albania, Congo, Gabon, Cambodia, Guinea-Bassau, Kenya, Tanzania, Afghanistan, Sudan, East Timor, Serbia, Kosovo, Nigeria, Yemen, Cote d’Ivoire, Georgia, Djibouti, Pakistan, Lebanon, Libya, Uganda, Jordan, Chad, Mali, Syria, and so many other places not even known, as well as the seas between them and the air and space above. Most of these wars have been unauthorized, and with each of them, the ability of the President to commit our forces unilaterally, without any checking or balancing of his powers, has become easier and more frequent.  Our national security strategy, once a robust combination of diplomacy, information, military, and economy, has become one of “just do something…anything,” in which we believe any problem can be solved with a sprinkling of drones, bombs, or boots.  We simply cannot sustain this accelerating expenditure of blood and treasure.

Third, our aversion to making the tough decisions either to declare (or at least authorize) wars or not has led to an increasingly-wide gulf between our military at war and our populace at peace.  Without any requirement to convince Congress to support our wars, the President has not had to express his reasons or strategy to the nation.  The absence of such communication, combined with our habit of spending ethereal borrowed money on military operations and the consequential expenses, allows the wars to continue without any sacrifice in the form of taxation or program cuts.  The citizenry thus remains blissfully insulated, ignorant, and detached from the sacrifices made by our forces.  And the ultimate consequences of this include an angst and bitterness in our returning combat veterans, directly contributing to their obscene rate of PTSD and even suicide.

For this reason, I have been urging Congress to declare our illegal wars in Syria, Iraq, and elsewhere.  Often, this endeavor has felt as if I am tilting at windmills, and I must confess to having gained little traction, or even an audience, with either my Representative (Annie Kuster) or senior Senator (Jeanne Shaheen).  I have had some interaction and discussion with Senator Kelly Ayotte and her staff, but despite the pro-military credentials she trumpets, and some promises to visit the subject, she has not taken action.

“The silence of Congress in the midst of this war is cowardly and shameful…this Congress, the very body that is so quick to argue against President Obama’s use of executive power… allows an executive war to go on undeclared, unapproved, undefined and unchecked.” – Sen Kaine (D-VA)

In the words of Senator Tim Kaine (D-VA), “The silence of Congress in the midst of this war is cowardly and shameful…this Congress, the very body that is so quick to argue against President Obama’s use of executive power… allows an executive war to go on undeclared, unapproved, undefined and unchecked.”

But perhaps, if you and others join me in this Quixotic venture, we might begin to make enough noise that would cause our Congress and President to act.  So, I am asking you to do so, to spread this message, and to hold your representatives’ feet to the flame.  I’d also appreciate any ideas you may have in ways we can do this.  Feel free to contact me, or post your thoughts below.

Please click here to learn more about the author.