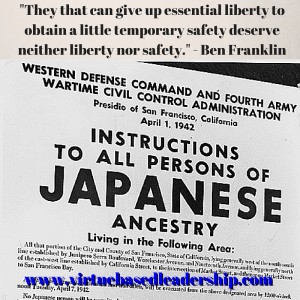 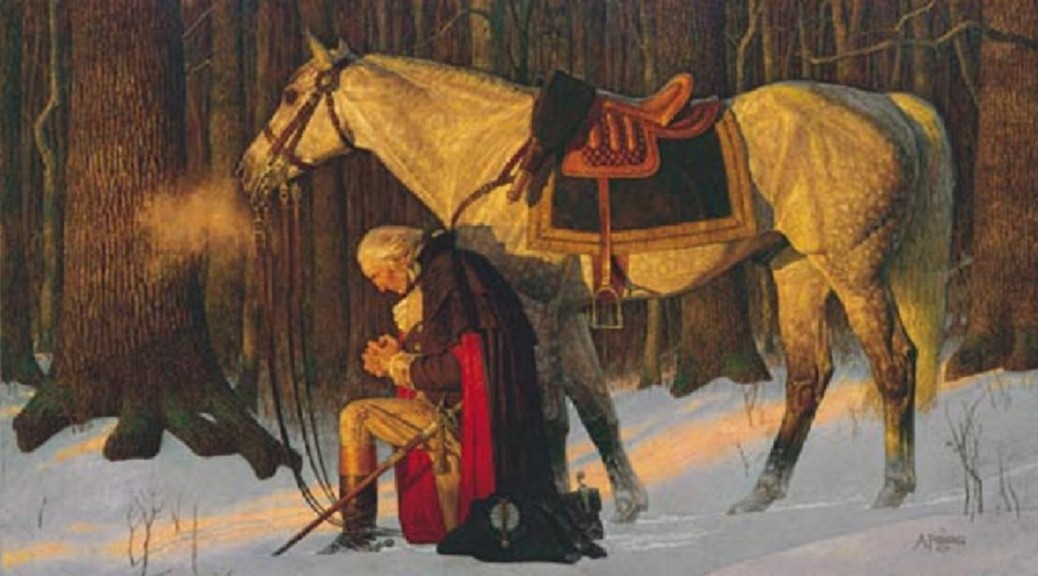 The vast majority of US politicians, even those who are most vehement in their demands for “separation of church and state,” end their speeches with the words, “God Bless America.”

Indeed, God has blessed us.  Our founders were explicit in their recognition of God’s abundant blessings on this land, His graceful endowment of certain inalienable rights, and His establishment of government for the express purpose of securing them.

Later, in our Constitution, our founders would further this ideal, stating that the union must secure these blessings, not only for themselves, but for their posterity – those who would follow. Us.

And so we, their posterity, must address security in that sense – one that seeks not to preserve comforts or riches, but instead to protect the rights granted to all mankind. “Stewardship” of the blessing of liberty, if you will, because a chief function of a people created to honor and glorify our Creator, is to be good stewards of His gifts. And I believe one of those gifts exists in the form of our military and its men and women.

We are not being good stewards.

Even as DESERT SHIELD and later DESERT STORM were beginning what would become twenty-five years of continuous combat operations by our nations’ military, with no forseeable end in the near future, our military began suffering cuts of manpower, equipment, supplies, and training.

This hollowing accelerated under President Clinton, to the point that as terrorists were planning to attack us on September 11th, 2001, we had reduced our military’s size by over 30%, and even after increasing our forces slightly during the War on Terror, we have again begun the decline.

This might have been acceptable had we decreased our military’s mission proportionately. Yet, we did the opposite, adding operations not only in Iraq and Kuwait, but Zaire, Sierra Leone, Bosnia, Somalia, Macedonia, Haiti, Liberia, Central African Republic, Albania, Congo, Gabon, Cambodia, Guinea-Bassau, Kenya, Tanzania, Afghanistan, Sudan, East Timor, Serbia, Kosovo, Nigeria, Yemen, Cote d’Ivoire, Georgia, Djibouti, Pakistan, Lebanon, Libya, Uganda, Jordan, Chad, Mali, Syria, and so many other places not even known, as well as the seas between them and the air and space above.

This has stressed our military to its breaking point. With our active forces stretched thin, and our reserves not only committed, but overcommitted, it is no longer possible to allow units to redeploy, replenish, and reconstitute between deployments. Multiple deployments in a career are the standard, and eight or more extended combat tours are common. Military families have become the sacrificial lamb for the idols of our comfort and ambition, and each day, 22 veterans who the enemy couldn’t kill on the battlefield are killing themselves.

This is a grave threat to our national security indeed.

This threat is not new. In fact, at the very birth of our nation, with our young Continental forces fresh from early victories in Boston and Fort Moultrie, and encouraged by the recent creation of the Declaration of Independence, General Washington saw a problem in his Army.

On August 3rd, 1776, certainly the General was concerned with the lack of manpower, equipment, supplies, and training. But what drove him to write a general order that day, to be broadcast to the entire army, were offenses against the spiritual and moral foundations. Not only did he believe those offenses to be prejudicial to good order and discipline, but in his words:

“…we can have little hopes of the blessing of Heaven on our Arms, if we insult it by our impiety, and folly”

Despite the misguided and misinformed messages from some today that demand our military and its leaders be amoral and aspiritual, General Washington knew then what is true now: That a force without a firm spiritual and moral foundation would be doomed to failure, or even worse, destined for success in which it would become an easy pawn of tyranny rather than a champion of liberty.

You see, though troops, arms, equipment, supplies, logistics, training, and other assets are the flesh, the organs, the muscles and sinew of a military, the moral and spiritual foundation provide its skeleton and its direction. And without that structure, without that direction, the force cannot be one for good.

In fact, General Washington believed the moral and spiritual foundations to be so important that years before, as a Colonel in the Virginia Regiment, he had championed and won the institution of a professional chaplaincy, a force multiplier he brought with him to the Continental Army, and one which has survived, despite terrible assaults in recent years, to today.

The Continental Congress agreed with him, and later passed a resolution stating:

…Resolved, That all officers in the Army of the United States be, and hereby are strictly enjoined, to see that the good and wholesome rules provided for the discountenancing of profaneness and vice, and the preservation of morals among the soldiers are duly and punctually observed.” – Continental Congress, 12 Oct 1778

Now, let’s be honest. I’m a retired fighter pilot. I’ve spent many an hour in squadron bars, officer’s clubs, and other locales home and abroad. I’m not about to tell you that the military is or ever has been free of profaneness or vice.

But because of its spiritual and moral foundations, foundations that start with a person’s first oath of enlistment, ending with the prayer “So help me God,” the military has had at its core a strength to rein in those who stray from its moral compass. Good order and discipline is ineffective without a definition of “good.”

Yet today, we attempt to emasculate our chaplaincy, doing our best to forbid them from practicing their faith or even forcing them to act against it. We attempt to muzzle our military leaders, telling them – wrongly – that public profession of faith is somehow unconstitutional.

If it were unconstitutional for an official to do so, by the way, where were the cries of our founders to silence our first President when he proclaimed publicly,

“it is the duty of all Nations to acknowledge the providence of Almighty God, to obey his will, to be grateful for his benefits, and humbly to implore his protection and favor”

Why did the founders not shout down Thomas Jefferson, the oft-quoted genesis of the “Separation of Church and State” doctrine, when he said?

“The practice of morality being necessary for the well-being of society, [our Creator] has taken care to impress its precepts so indelibly on our hearts that they shall not be effaced by the subtleties of our brain.” – Thomas Jefferson, 1809

[I consider] ethics; as well as religion, as supplements to the law in the government of man.” – Thomas Jefferson, 1824

Years later, where was the public outcry when General Eisenhower finished his address to the troops on D-Day, with:

“…let us beseech the blessing of Almighty God upon this great and noble undertaking.”

Not only is it not unconstitutional for our leaders, civilian and military, to speak from their faith… it is unconscionable for them not to!

Because when the spiritual and moral foundation of our military is attacked and allowed to crumble, the consequences are grave. We see those consequences on the battlefield, we see them in garrison, and we see them at home. And many who have worked so hard to remove any reference to the moral, to the boundaries between right and wrong, are the loudest voices when those boundaries are crossed.

This is the spiritual and moral hollowing of our force.

We see it today when the perverse and profane are lauded, while the noble and virtuous are derided.

When a convicted traitor is provided access to gender change therapy while combat veterans are denied basic healthcare.

When our military profits from sales of pornography in its exchanges, but removes bibles from Navy Lodges.

When military personnel in uniform are encouraged to march at a Gay Pride parade, but prohibited from helping the Boy Scouts.

When our leaders move to provide abortions through military hospitals and healthcare insurance, while reducing promised benefits to military retirees.

When we add more wars onto the shoulders of our armed forces – in Libya, Syria, Northern Iraq, and elsewhere – without having the integrity to follow Constitutional process, and then prosecute our troops when they rightly assert their Constitutional rights.

When fourteen Americans including an unborn baby are killed, and thirty others wounded by a lone terrorist in a room full of soldiers we have unarmed, and we continue to say it is wrong to allow our men and women in uniform to be armed on post.

When another terrorist kills four US Marines and a Sailor, again on our own soil, and we again say it is wrong to allow our men and women in uniform to be armed.

These are symptoms of the spiritual and moral hollowing of our force. And as true today as it was in 1776, if we allow it to continue, our military will either be doomed to fail, or, if it succeeds, it will become a force for despotism rather than liberty.

Now, as a former commander, I will tell you that the worst thing you can do to a leader is to present a problem without a solution.

So here is my solution.

Those of you still in military service: Uphold your oath. Know the Constitution you have sworn to support and defend. Learn the basics of Constitutional law. Know the difference between expression and insubordination, between free exercise and establishment. And then execute. Do what is right. Live your faith. Do what is honoring to your oath, and to the God you asked to help you uphold it. Do not waver.

To those of you who are in political office, or aspire to such, including those presidential candidates here today, I say the same. Be willing to sacrifice your political careers for what is right. Be humble before your God. Fight for what is right. Fight for the troops. Never, ever submit to the most dangerous lie of politics and leadership: That if you avoid doing what is right today, you’ll have a chance to do greater good tomorrow.

To the rest of us. Those who provide powers to the government through our consent as the governed: Be involved. Be present. When necessary, be loud. Very loud. Be known at your elected representatives’ local offices. Pray for them. When they do right, encourage them. When they waiver, bolster them. When they fail, take them to task and remove them from office.

And to all of us: Act justly, love mercy, and walk humbly with our God.

And let us all pray that we would turn away from the impiety and folly that insults our God, so that we can again ask his blessings on our endeavors. And may God then bless our troops, our leaders, and the United States of America.